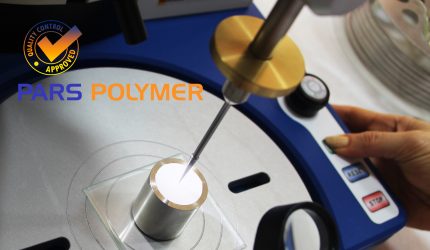 PARS POLYMER test facilities are equipped with modern laboratory equipment such as;

ASTM1500 Color Scale is widely used for the grading of petroleum products such as lubricating oils, heating oils and diesel fuel oils. Mineral oils are constantly checked for color during processing in order to establish when they have been refined to the required grade. Color is also used as a means of confirming that the correct oil or fuel is being used for its intended use and that no contamination or degradation of quality has occurred

ASTM D1500 is a single number, one dimensional, color scale ranging from a pale straw through to a deep red in sixteen steps (0.5 – 8.0 units in increments of 0.5 units). Other petroleum products that do not fall within the scope of ASTM D1500 such as white spirit, petroleum wax and kerosene may be graded using the Saybolt test ASTM D156 or IP17

Measuring the hardness (firmness) of a product determines whether that will be suitable for a particular product in producing the desired properties.It determine the penetration depth of a standard cone under defined conditions. Cone angles can range from 15–90°

Melting point is defined as the temperature at which the solid phase exists in equilibrium with its liquid phase. Drop melting point, Test Method D127, is often used to measure the melting characteristics of petrolatum’s and other high viscosity petroleum that covers the determination of the drop melting point of petroleum wax and other micro crystalline wax

Spectrophotometry is a method to measure how much a chemical substance absorbs light by measuring the intensity of light as a beam of light passes through sample solution. Every chemical compound absorbs, transmits, or reflects light over a certain range. Spectrophotometry is a measurement of how much a chemical substance absorbs or transmits

An instrument that determines the flash point of a sample, which is the temperature point at which the sample vaporizes to another composition state in the air that can be ignited. At that moment, the flash point apparatus can determine and measure the vapor pressure change in which this occurs, also known as the lowest limit of flammability. Therefore, vapor concentration can be determined by temperature